So a question emerged from Simon:

S: Good morning Philip. I was wondering that if thoughts are not our own how were they created in the first place? Been meaning to ask you this for some time. Blessings, Simon.

P: Simple response since the Infinite IS Infinite it can create Infinite ways to experience itSelf one of them is thought vibration…

P: You can also say the physical universe is a thought experiencing itself and ego is a thought obsessed with itself.

S: So the Silence is Infinite potential?

P: Infinite energy that is aware of itSelf that chooses to experience itSelf.

P: It’s from a song that came to me but true also! *Miten and Deva Premal

P: So you can also say thoughts are things and… things are thoughts.

P: This fits with physics in that there is just a field of energy until it is observed and then ‘collapses**’ into something. Take away the observation and it’s just energy again. The observation is the thought…

** Collapse it the term physicists use referring to the ‘collapse of the field’ into a defined something.

P: You want to know the Mind of God – look around and inside you there it IS.

NOW you understand it more deeply.

S: WOW. That is beautiful.

A divine thought or expression.

P: “When God says ‘I’ nothing remains unsaid.”

The Infinite I and there’s no inside or outside I Infinite is ALL!

P: The Brilliance of the Universe itSelf.

That’s what the Universe does it wonders and wanders at itSelf.

The Silence said: “I have nothing to think about.”

So it doesn’t and does.

So the entire universe is the Infinite I thought.

… and without this it is Nothing.

I’ve also included below the second Live Stream Video which focuses on the Power of Awareness and, addresses one of the most often asked questions to do with thought… in the context of the above exchange ego the thought obsessed with itself and how to deal with that. 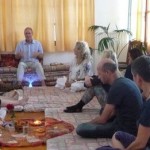